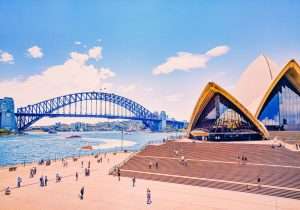 The COVID-19 pandemic has shaken Australia, disrupting the country’s economic sectors, especially the film and entertainment industry. Uncertainty loomed as the arrival of the Delta variant imposed a new working environment for actors, directors, agents, and people working in production. Snap lockdowns, border closures, slow vaccination rollout, and hotel quarantine for overseas visitors contributed took a toll on the industry.

The Guardian reported this month that the production of two major films was stalled. Netflix’s Extraction 2 starring Chris Hemsworth relocated its filming site from Sydney to the Czech Republic. Seventy Australians were among the crew working on the film.

Poker Face, a film directed by Russell Crowe, suspended production just six days short of wrapping after two crew members tested positive. The rest of the production was immediately isolated. The future also seemed bleak for live theatre performers. When the pandemic hit, award-winning entertainer Catherine Alcorn had to think of ways how to push through with her tour and performance as shows were moved to 2022.

According to TedXSydney, Alcorn, together with her producer and director, Brian Cobb and Ted Robinson, tinkered with the idea of launching a virtual entertainment space in the meantime and would move to live venues once restrictions were lifted. Despite the situation, the show must go on, as the saying goes.

In Sydney, the capital of the Australian entertainment industry, cinemas, theatres, restaurants, and amusement parks were shuttered and closed, but not film and TV production.

According to Yahoo, Transfusion, a thriller starring Sam Worthington, successfully filmed all of its scenes in the city while adhering to and practising protocols. Another high profile film that was able to escape lockdown disruption was Thor’s Love and Thunder.

It seems there is no stopping the Australian film and entertainment industry as it was reported that major productions are fleeing the US west coast to shoot in Australia. NME reported that this move will boost Australia’s economy worth US$ 3 billion, which will create more jobs. It is also rumoured that Marvel is planning to film in Sydney instead of Atlanta in the next five years.

Films such as Elvis, Joe Exotic, Blacklight, Furiosa, and Thirteen Lives are filming in Australia. The country is having its Hollywood moment and has earned a new moniker, Aussiewood. It’s not only films experiencing the boom; studios are also capitalising on the opportunity by setting plans to develop, build, and launch in Australia.

Last month, Deadline reported that producer James M. Vernon is helming the development of Lakeside Studio, a multi-million dollar facility in Western Sydney. It will undergo three phases to be able to feature ten stages of various sizes to attract large scale productions. A massive 900,000-litre water tank is being currently built at Victoria’s Docklands Studios, which will be used to film blockbuster movies, according to ABC.

Russell Crowe is also financially backing a US$438 million studio complex, dubbed as the Pacific Bay Resort Studios & Village, reported The Guardian, a testament of Australia’s success braving through the pandemic.